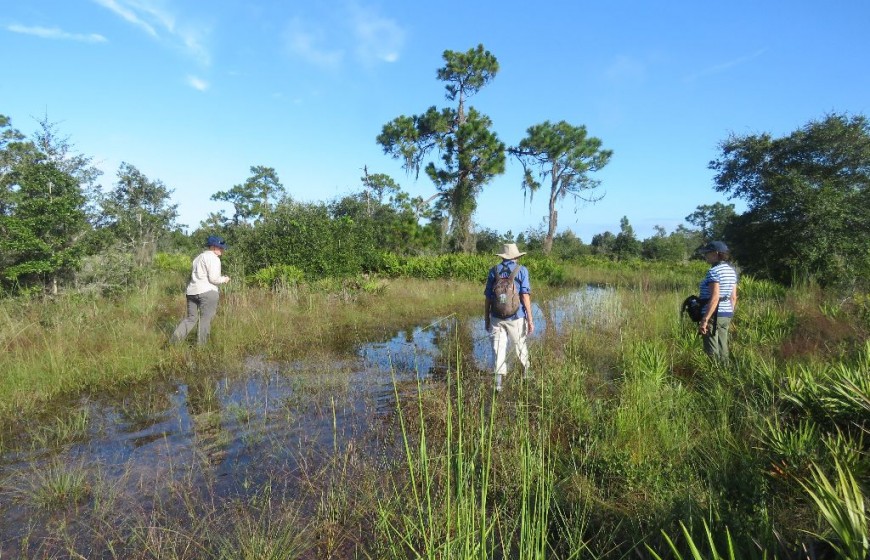 On Tuesday, October 4, 2016, the first PRAS walkabout of the new season was held at Prairie Shell Creek Preserve. Monday evening, and night, heavy rains fell in the local area covering with water the trails that had been dry just days before. Even though some roads were still under water and we anticipated a wet walk, five brave people showed up to go birding. The sun was shining in a bright blue sky that morning and we were rewarded by seeing over 28 species of birds. Some of the smaller birds in heavy foliage, we could not identify with certainty.   The fall migration has begun. Some of the birds that were seen were Prairie Warblers, Yellow Warblers, a Parula, Summer Tanager, Swainson’s Thrushes, Pileated Woodpecker, White-eyed Vireos, a Red Headed Woodpecker, a Cooper’s Hawk, and a Red-tailed Hawk. We could hear a Bob White and a Catbird.

We also saw one of the resident Scrub Jays while wading through Scrub habitat that is rarely under water. It was worth getting our feet wet to see so many birds. In addition to the birds, we saw many of the fall wildflowers starting to bloom. Seeing the Pteroglossaspis orchids was also a special treat. They are commonly called the Crestless Plume Orchid, live in sandy soils, and bloom from August to October.

It was a very good day for being outdoors enjoying birding in lovely surroundings. Our next PRAS  walkabout will be Tuesday, November 1,  at Kiwanis Park (in Port Charlotte) which has been a hot spot for Warblers this fall.  Please join us then.

Photos by Bob and Joanne Winter

More great photos from PRAS member, Dennis Danner. Thanks for sharing them with us! ... See MoreSee Less

Gorgeous!!! What is the bird with the yellow chest?

Hope you stopped by the environmental center at Alligator Creek for Trees Giving last week. There were many happy faces as they received their 2 free trees! ... See MoreSee Less

Thanks to all those at CHEC that made this event possible!

I got 2 Beauty Berry Bushes. They are beautiful with their long branches of purple berries, and great food for wildlife !