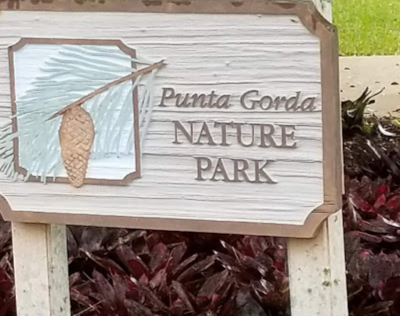 On Tuesday February the 4th we had 17 people gather at the butterfly garden at 4pm for the Punta Gorda Isles Nature Park for a Walkabout. The weather was perfect: sunny with a cool breeze. The majority of participants brought their own binoculars and 2 accepted the Audubon binoculars that were available for their use. The garden at the trail head is beautiful. We walked around the butterfly section where there were several butterflies. We saw native plants like Coral Honeysuckle, Firebush, Dune Sunflower, Wild Coffee and non native plants like Giant Milkweed. All plants are labeled with their names and whether they are native or non-native. Everything is maintained by volunteers known as the Green Thumbs. The area has several island plantings with themes like a butterfly garden, a succulent garden, etc. there are plans to have a large number of native plants added to the area that is closer to the Firehouse. The trail is a big loop that can be easily walked in 45 minutes even if you stop at all of the observation points. With a big group it takes longer and we were there for 2 hours with frequent stops.

We observed two Eagles atop a tall metal pole. One flew away above us and later returned to very vocal greeting. We also saw a large Osprey nest built on a large elevated platform. The Osprey neat was empty at the time probably because they were out catching fish. We saw a Little Blue Heron in the Mangroves hunting something to eat near the fishing pier. There were several small birds up in the treetops many of which were Gnat Catchers. A few Seagulls flew overhead and there were some Vultures too.  Mangrove Crabs were scurrying along the branches of the Mangrove trees as we crossed a small bridge over a creek. As we approached the trail end a Cottontail rabbit darted out of the brush. According to one of the Green Thumb volunteers  the rabbits are public enemy number one as they like to treat the garden as an all you can eat salad bar.

There are lots of educational signs explaining the plants and birds. There are two parking lots each with a trail head so if you are meeting someone there be specific about which parking lot you’ll meet them at. One is at the corner of Bal Harbor  and Aqui Esta and the other one is closer to the Fire Station on Aqui Esta. The trails are dog friendly but they must be kept on a leash as per the County ordinance. The City Of Punta Gorda is responsible for the maintenance of the natural area there and it was encouraging to see that they are in the process of cutting down and removing a large number of the invasive Brazilian Pepper trees.