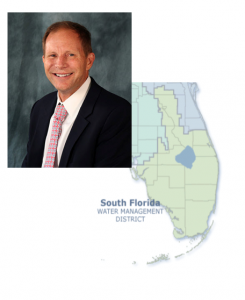 As a long-time resident of Southwest Florida, Goss first became involved with water quality issues when he worked as the Executive Director of the Gasparilla Island Conservation and Improvement Association on Boca Grande in the early 1990s.  Goss grew up on Sanibel Island and currently lives there with his wife and three sons. He is active in his community and served as an elected member of the Sanibel City Council. He serves on the boards of Captains for Clean Water (Treasurer); the Southwest Florida Community Foundation (Executive Committee); the Sanibel Captiva Conservation Foundation; and the United Way of Lee, Hendry, Glades and Okeechobee counties. He has served as an appointed member of the Lee County Coastal Advisory Council and as an appointed member to the Charlotte Harbor National Estuary Program’s Management Committee.  He received a B.A. Degree (Area Studies – Political Science, Environmental Studies, English) from Rollins College and a Master’s Degree in Public Policy from Georgetown University.

The South Florida Water Management District’s new Governing Board has awarded a $524 million contract to build the Caloosahatchee (C-43) West Basin Storage Reservoir. The 10,500-acre reservoir will store 170,000 acre-feet of water with the aim of being able to deliver fresh water to the Caloosahatchee River and Estuary during the dry season.  The district had previously awarded contracts for work that included clearing the reservoir site in Hendry County, and building necessary pump stations. This final contract includes building approximately 19 miles of embankments, allowing the reservoir to hold water at depths of 15-25 feet (an environmental concern). The contractor will also build 15 miles of perimeter canals, and 14 water control structures, as well as recreational features on the site.

Current controversies over 2008 water level regulations and releases exist as dike improvements are being made. The Army Corps is currently taking public comments on the new regulation schedule for Lake Okeechobee. Historically, the Caloosahatchee was a small meandering river that was not connected to Lake Okeechobee. Starting in the late 19th century, a series of projects to dredge and channelize the river removed the bends in the river, referred to as oxbows, and connected the river to the lake. As a result, water that used to flow south from Lake Okeechobee to the Everglades, now flows to the refuge on its way to the Gulf of Mexico.  Some of the projects to dredge and channelize the Caloosahatchee were driven by the desire to make money by turning wetlands into property suitable for housing and agriculture. Other drivers included the need to provide flood control, to provide fresh water to Lee County, and to prevent saltwater intrusion into upstream aquifers. Creating a balance between protecting natural resources and the needs of a growing population is at the heart of virtually all the conservation efforts in Southwest Florida. In addition to the work being done to improve the Caloosahatchee, those efforts also include the U.S. Army Corps of Engineers’ project to re-examine the Lake Okeechobee Regulation Schedule, or LORS.