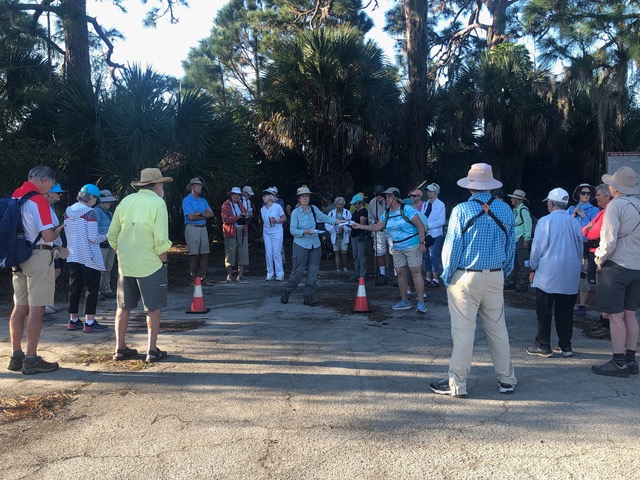 We had a great turnout for our guided walk, with a combination of Peace River Audubon Members and Lemon Bay Conservancy members. As we looked for birds, Eva Furner, pointed out the renovations that had been completed as part of the long range plan for the preserve. It was a beautiful sunny day and we saw about 40 different bird species on our walk. We covered both the east and west sides and stopped at the feeding station. Some of the highlights included a White Pelican, an Osprey carrying a fish, a Pileated Woodpecker working on it’s nest, and a female Painted Bunting at the feeders.

Here is the list of the birds that were seen and heard:

Hope you plan on participating in the Christmas Bird Count on Saturday, December 17. You don't need to be an expert to get out there and help although we do need
experienced birders also. To sign-up or to get more information please email our CBC chair, Tony Licata, at aflicata02gmail.com. Tony can assign you to a group that needs more volunteers or a group counting in your area. Here is a list of the areas covered in our count. WE NEED YOUR HELP!

If you can help in East County or on Burnt Store just reply here….

Area 2 needs help! We need 2 people to do CHEC at Alligator Creek and someone to drive through Burnt Store Meadows…

I always need help too in east county!

So interesting to see where the Swallow-tailed kites travel for the winter…November tracking news on 11 Swallow-tailed Kites tracked by ARCI:
www.arcinst.org/2022/11/22/the-who-what-where-swallow-tailed-kite-winter-update/ ... See MoreSee Less

Sanibel Botanical, on of our local Swallow tailed Kites, is in Brazil now!

I see these where I live. They are cool to watch! ❤️