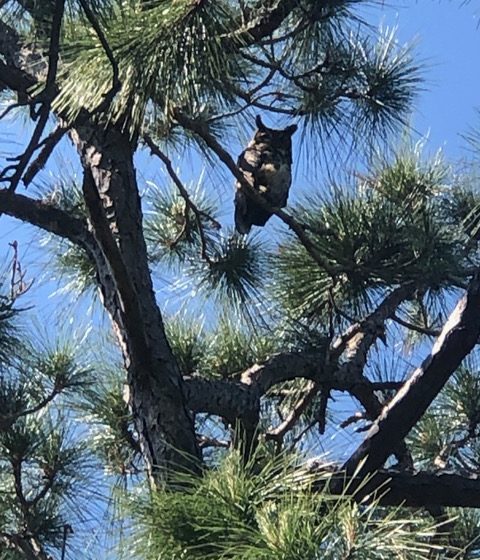 Our spring trip to Fort De Soto in Pinellas County is always something to look forward to. Once again we had beautiful weather but as this was a holiday weekend, we only had one carload heading north. Mike K. was our trip leader so the drive just flew by with good conversation and networking. Our first stop was the Gulf Pier where we hoped to get to see the Black-legged Kittiwake but had no luck. We did enjoy identifying the waterbirds there…gulls, terns, sandpipers, plovers, and about 5 graceful Snowy Egrets that were showing off their breeding plumage. Then on to the North Beach Grove which is always good for warblers. We found the Blackpoll Warbler, Black and White, Northern Parula and also flycatchers, woodpeckers, and others that like the oaks. Our next stop was north beach where we quickly spotted a Reddish Egret, Marbled Godwit, Dunlins, Semipalmated Plovers and the Least Sandpiper. Seeing the Great Horned Owl with one baby owl was one of the highlights of this trip. It was in the Arrowhead picnic area in a tall pine. On the way to the Bay Pier we stopped again to find the Black-legged Kittiwake. We heard that it had fallen sick and was taken to a wildlife center. Also unfortunate was the construction at the Bay Pier so we stopped for lunch under a shady tree at the administration building. Before heading home we checked out the east tip and added a few more species including the Short-billed Dowitchers. All together we saw 42 species! A big thank you goes to Sandy A. for being our driver…not an easy task on such long a trip.