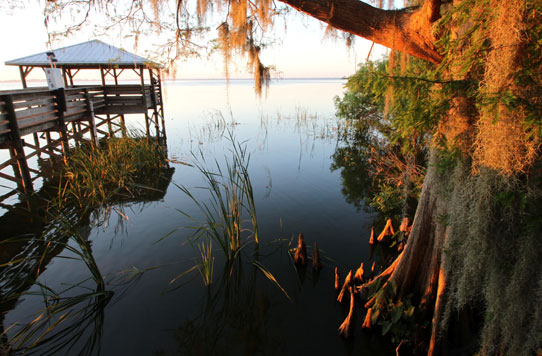 The Peace River Audubon Society’s most recent field trip was to the Circle Bar B Preserve in Polk County. A restored wetland, this preserve is home to a wide variety of bird life, and so it was with great anticipation that our team of intrepid birders made the two-hour trip north.

We were not disappointed. Just minutes from the Preserve’s beautiful Discovery Center, the group stopped to observe a pair of Barred Owls. A third Barred Owl could be heard hooting close by.

Reluctantly leaving the owls, our group – consisting of 8 PRAS members and 2 avid birders from Pennsylvania – continued on the trail. There were numerous species counted, photographed, discussed, and recorded, but the two highlights on this first section of the walk were the flock of White Ibis, numbering in the hundreds, which put on two aerial displays of breathtaking wonder; and then the three Purple Gallinules together, a sight heretofore unseen by most members of the group.

Along this first trail – named “Heron Hideout” with good reason – there were four occasions where we saw 5 species together, making for some remarkable photographic opportunities.

The PRAS group turned off onto the next trail – “Marsh Rabbit Run” – which took us deep into the wetland. As we traversed the narrow footpath across the swamp, we noticed basking alligators on both sides of us. And lots of birds. While Palm and Yellow-rumped Warblers kept a constant twitter going, herons and egrets of all sizes and colors hunted in the marsh alongside us. Stopping at the bird blind at the far end of this trail, the group was easily able to observe nesting Bald Eagles, a Great Blue Heron rookery, and a flurry of Blue-gray Gnatcatchers checking us out!

Heading back along the same route, and as so often happens, we saw different species on the return trip. The House Wren was a crowd pleaser, as was the surprisingly solitary Limpkin.

The bird knowledge of this PRAS group was superb, but what was absolutely astonishing was their ability to spot, or “find”, birds hidden to most human beings. A prime example being the Black-crowned Night Heron discovered deep in the underbrush by two of our “eagle-eyed” members. Once the heron was pointed out to the rest of us, it made for great viewing and photographs.

After a three-hour jaunt, the group was ready for a well-earned rest and picnic at one of the many covered pavilions at Circle Bar B. And right on cue, a Ruby-throated Hummingbird stopped by and joined us for lunch!

In all, 40 species were observed by the PRAS group, making for a great outing at a fabulous location.

Circle Bar B Preserve in Polk County – a birder’s delight that is well worth the journey.