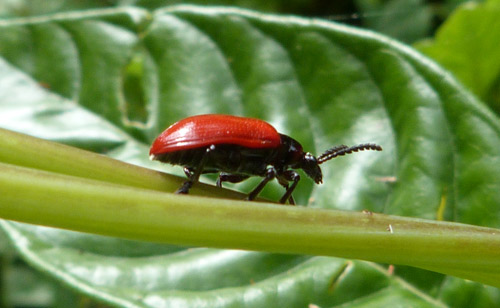 The invasive air potato vines are thriving at the Audubon Pennington Nature Park. The Florida Agriculture Division sent 200 beetles via Fedex to Rob Mills, PRAS Director. Rob is instrumental in the placement of the beetles to help stop the destruction of the plant life at Pennington. Thank you Rob!

In addition to the beetles, we are actively cutting vines which will slow the air potato production. This summer for the first time we are digging up the underground tubers which is the only definitive way to kill the vine. So far in May and June several hundred tubers have already been dug up.

If anyone has air potato vines and would like to order beetles, they can contact Cassandra at the Florida Department of Agriculture at cassandra.kelm@fdacs.gov or by calling (352) 395-4745.

The beetle only attacks Air Potato

Extensive host range testing by scientists at the USDA/ARS Invasive Plant Research Laboratory in Fort Lauderdale demonstrated that the air potato leaf beetle is a specialist feeder on air potato. It will not complete development on any other plant found in Florida and is only known to feed on Dioscorea bulbifera in its native range (Pemberton and Witkus 2010).

More information about the beetle:

Biology and ecology of the air potato beetle: http://edis.ifas.ufl.edu/pdffiles/in/in97200.pdf

Plants provide us with food and fiber, decorate our yards and gardens, and provide habitat for wildlife. However, when plants grow where they are not wanted, we call them weeds. To home owners, weeds may be unwanted plants in lawns or gardens. To farmers, weeds are plants that interfere with raising crops or livestock. To biologists who manage natural areas, weeds are plants that interfere with the functions of natural communities.

Natural area weeds are often exotic plant species (plants whose natural range does not include Florida and were brought here after European contact, about 1500 A.D.) that have become naturalized (capable of reproducing outside of cultivation). Invasive exotic plants are weeds that alter the functions and value of natural areas by displacing native species (plants whose natural range included Florida at the time of European contact) and disrupting ecosystem services. Natural area managers must remove invasive exotic plant species to maintain the integrity of natural areas.

Air potato is an invasive plant species in Florida that should be removed from public and private properties to help protect the state’s natural areas. It has been listed by the Florida Exotic Pest Plant Council as one of Florida’s most invasive plant species since 1993 and was added to the Florida Noxious Weed List by the Florida Department of Agriculture and Consumer Services in 1999 (5b-57.007 FAC). Plants on the Florida Noxious Weed List may not be introduced, possessed, moved, or released without a permit.

Air potato can quickly engulf native vegetation in natural areas, climbing high into mature tree canopies (Figure 1). It produces large numbers of bulbils (aerial tubers), which facilitate its spread and make it extremely difficult to eliminate because new plants sprout from even very small bulbils. It invades a variety of habitats, including pinelands and hammocks of natural areas (Langeland et. al. 2008).

Native to tropical Asia and sub-Saharan Africa, air potato was spread by ancient Polynesians throughout much of the South Pacific where it is now considered invasive. It was brought to the Americas from Africa during the slave trade (Coursey 1967), and introduced to Florida in 1905 (Morton 1976). It is found throughout the state from Escambia County in the Panhandle to the Florida Keys (http://www.plantatlas.usf.edu/maps.asp?plantID=1726).

Air potato is a member of the yam family (Dioscoreaceae). Yams are cultivated for their edible underground tubers in western Africa, where they are important commodities. However, uncultivated species—such as air potato—are generally bitter and even poisonous.

How to Recognize Air Potato 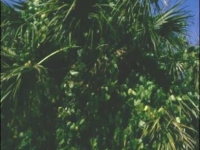 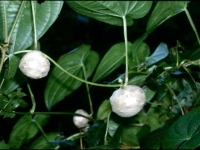 Air potato is a vigorously twining herbaceous vine, often arising from an underground tuber. Freely branching stems grow to 60 ft. in length. Stems are round or slightly angled in cross section and twine to the left (counter-clockwise). Aerial tubers (bulbils) freely form in leaf axils (Figure 2). Bulbils are usually roundish with mostly smooth surfaces, and grow up to 5 in. x 4 in. (Figure 2). Leaves are long petioled (stalked), alternate; blades to 8 in. or more long, broadly heart shaped, with basal lobes usually rounded and with arching veins all originating from one point. Flowers are rare (in Florida), small, and fragrant, with male and female flowers arising from leaf axils on separate plants (i.e., a dioecious species) in panicles or spikes to 4 in. long. Fruit is a capsule; seeds are partially winged.

Winged yam (Dioscorea alata), often mistaken for air potato, is similar in appearance and is also a non-native invasive species. Climbing up to 80 ft. in length, stems are square in cross section with “winged” corners that are often red-purple tinged, and twine to the right (clockwise). Winged yam has opposite leaves that are more triangular and larger than those of air potato. Though not as widespread as air potato, winged yam nonetheless ranges from Escambia to Miami-Dade counties (http://www.plantatlas.usf.edu/maps.asp?plantID=1750) and is probably more widespread than has previously been recognized. Winged yam can produce massive edible tubers, some of which have been recorded to weigh over 100 pounds.

Three other introduced species of Dioscorea may be encountered in Florida: Chinese yam (D. polystachya), Zanzibar yam (D. sansibarensis), and wild yam (D. villosa). None of these is considered to be invasive. Our native wild yam (D. floridana) is infrequent in hammocks and floodplains of northern and western Florida, never forms aerial tubers, and has leaf blades that rarely reach 6 in. long.

Many Thanks to all the dedicated Volunteers at the Audubon Pennington Nature Park for their many hours of preserving our Florida native plant life.