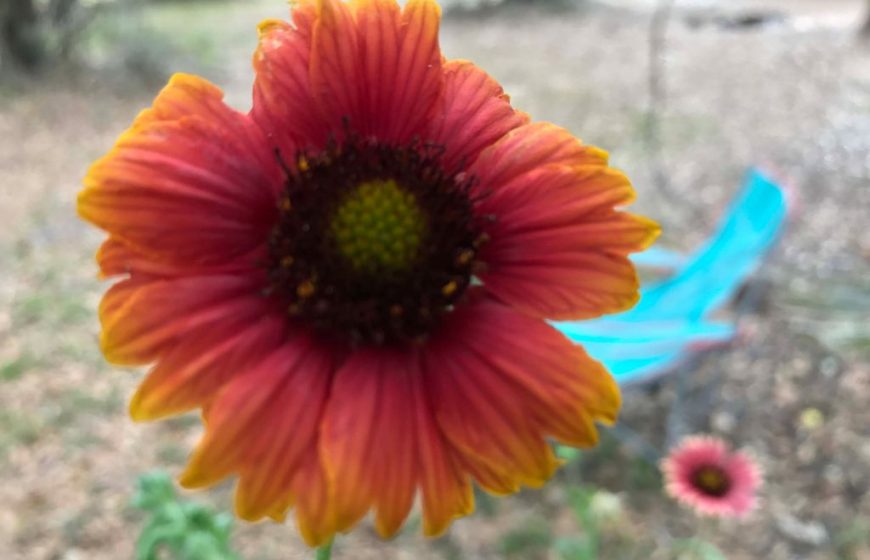 Peace River Audubon Society celebrated Earth Day at Deep Creek Preserve in DeSoto County.   A reporter from the Charlotte Sun showed up for a group picture at the beginning of the day.   An 8 o’clock nature walk led by Florida Master Naturalist John Phillips explored some of the trails in search of everything Nature, especially plants and birds, and the habitats in which they live.  Though the park has a variety of habitats,  pine flatwoods predominate.  This park contrasts with most of the pine flatwoods in southwest Florida as Longleaf Pine outnumbers  the Slash Pine that has filled the void left by the harvesting of Longleaf in the past.  Despite the drought, a number of wildflowers were in bloom, including two that stumped our experts.  Photographs were taken to assist in their eventual identification.   In the first part of the walk, birds were scarce,  teasing us with calls but not with sightings.  Only a few birds, including Eastern Towhee, were actually seen.  The last half hour made up for that.  Two Red-headed Woodpeckers were found in an area that also yielded a Common Nighthawk resting on a pine limb, all close and cooperative enough for us to have decent looks.  Three Wood Storks and a Swallowtail Kite soared above us.  A White eyed Vireo finally showed itself.  American Crows replaced the Fish Crows we usually see.  In the picnic area and the entry, Wild Turkey and Bobwhite were seen by a few, and a nesting Red-shouldered Hawk was found.  Twenty-one species of birds were identified.

After the walk, we headed to tables near the camping area where literature provided by SWFMD, including their comprehensive Recreation Guide to SWFMD lands, was available.  Also potted Gaillardia flowers, courtesy of Nancy Turner, and native flower seed packets, complements of Burpee were given away.

Most of us stayed for a picnic lunch.  We brought our lunches and ate near noon as the drought ruled out camping and hot dogs over a campfire.  It was just as well, as at the original picnic time of 4 PM, the skies opened up for some much needed rain.  Report by Eleanor Marr. Blanket Flower Picture from Nancy Turner