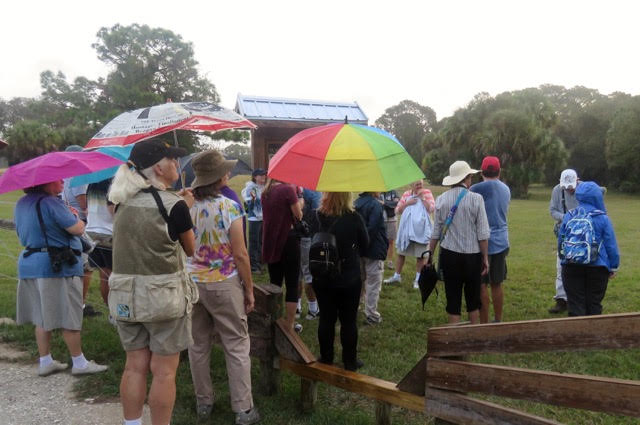 Although the sky was cloudy and rain sprinkled on and off, we managed to
escape the predicted thunderstorms and had another successful walkabout.
What a turnout we had for such a cloudy day! Cars were already there at
7:30 AM and continued to arrive until 8:00 AM, with a nice total of about 27
participants. It was interesting that several folks attended the walk just to
see the ranch and did not bring binoculars. Luckily the PRAS board had
purchased 10 new pairs and 6 of them were handed out to the guests who
were quickly trained on their use. After a brief look at the map and discussion
about Walton Ranch, we headed on our way. We walked through a corridor
of oaks and palms, then through the pasture. Those that could bird by ear
had a definite advantage on a windy day. Most of the smaller birds stayed
out of sight but were still counted on our list, like the Blue-Gray Gnatcatcher,
Cardinals, and the Palm Warbler. Others were seen flying above the ranch such
as Bald Eagles, Kestrels, Tree Swallows, and Vultures. Sandhills Cranes were
in the pasture as we walked by and also Killdeer and Cattle Egret. Our goal was
to head to a marsh area that we hoped would contain many species and we were
not disappointed. Most of the birds on our list were found at the marsh including
Anhingas, Coots, Gallinules, Great Egrets, Grebes, and Little Blue Herons. Both
Glossy and White Ibis were feeding along with Limpkins, Wood Storks, and
Yellowlegs. There was one Roseate Spoonbill there and that always delights
the crowd. We saw a total of 41 species that morning thanks to several expert
birders who joined us. The sky was still threatening rain, so most of the group
turned around at that point and headed back to their cars. Others threw caution
to the wind and continued on to explore more of the ranch. Everyone seemed
to enjoy the morning. Do you think anyone forgot to turn in their binoculars at
the end of the hike? Absolutely not! What a great group they were!