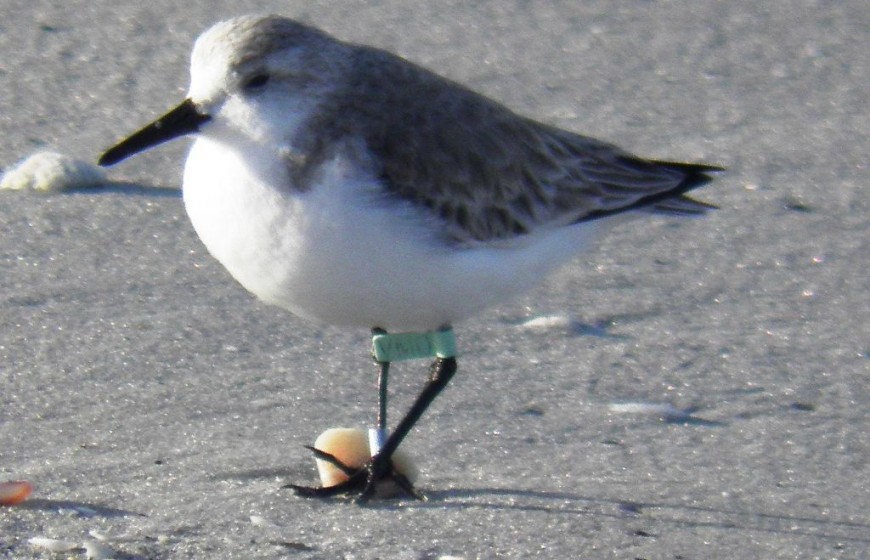 One of the most remarkable things that a naturalist can learn is how individual animals live their lives. We often see birds in large flocks or alone, yet we cannot know anything about them as individuals. Yet through banding programs using markers which are visible, it is possible to follow the lives of birds without capturing and damaging them, except for the initial capture. I have always opposed the capture and marking of birds unless there is a very specific need for the information which justifies the adverse impact of the capture process. However there is a very strong justification for marking shorebirds which are often undergoing population declines. If we know exactly where they spend their time, there is a greater likelihood of success in protecting these habitats.

On Christmas day I was out doing what I enjoy most, hiking and observing nature, specifically on the beach at Knight/Palm Island. Over a two hour period I observed about 640 individuals of 34 species of birds, feeding and resting along the shore. One of the most interesting observations I made was finding a banded sanderling, a small shorebird about 8 inches long and weighing only 2 ounces. You will see in the photos I took that there was a metal band on the lower right leg and a green flag engraved with a code, VM0, on the upper right leg. The bird was healthy and feeding in the surf zone as is their habit. Since I was fortunate enough to get a decent photo of the flag, I was able to enter the information into a web site (www.bandedbirds.org) and determine where it was originally banded and whether it had been seen since then.

To my amazement this tiny waif is at least 5 1/2 years old since it was banded originally on 5/15/2007 at Cooks Beach-North, New Jersey. It has been subsequently been re`sighted eight times in two locations during the fall, winter and spring. It apparently spends the winter on Knight Island, Florida, and migrates through Mispillion Harbor, Delaware (see map) on the way to its breeding grounds in the high Arctic. I find several aspects of this quite incredible. First that a tiny bird can live this long and survive five years of round trips between the Arctic, Delaware/New Jersey and Florida, and be spotted and identified repeatedly. The chances of this seem quite implausible yet there are photos to document three of these sightings. It is also impressive that this individual has chosen to return to the same locations during the winter and its long distance spring migration. In other words it is a “snow-bird” with a specific known location in two places. This tiny bird presumably knows the surroundings well and is able to return exactly to them year after year. We can only surmise that it also has specific breeding grounds somewhere along the coastal tundra of the high Arctic that it returns to year after year.

There are many things about nature that evoke wonder, but just thinking about this tiny shorebird surviving the many hazards of its life and completing this perilous journey up and down the eastern coast of North America leaves me absolutely amazed. There is something about knowing this bird (#VM0) personally that makes a big difference in the appreciation of its remarkable life journey and I hope will help we humans to provide better protection for these tiny specks of life. Let’s be better stewards of the beaches, shores and mudflats for all of these life forms that share the planet with us.

Bill Dunson is a biologist and professor emeritus of Penn State University. He lives in the Englewood, FL area part-time, and leads walks at Wildflower Preserve and often joins our PRAS walks.