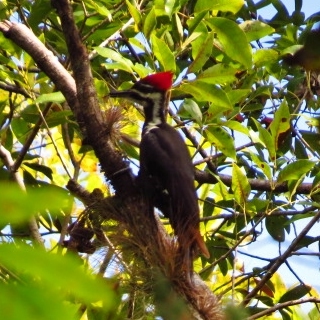 Field Trip General Oct 18, 2015
The first PRAS  field trip of the 2015-2016, season was Saturday, October 17, 2017. The weather was cool and dry, a welcome change from the summer heat and humidity. Fall was in the air with the maple and gum trees starting to show red colors and leaves falling from the trees. Eight people participated on the walk. As soon as we arrived at the trail head we were treated to the sound and sight of two Pileated Woodpeckers. Though out the trip we heard and saw more of the Pileated woodpeckers.  We first walked the Fern Garden Trail where we saw a Phoebe and Red-bellied woodpecker before we saw and heard two mating Red-shouldered Hawks plummet into the woods close to where we were standing. We heard Wrens and Catbirds.  Edith Wilbour then was treated to a sighting of a Summer Tanager. Another Summer Tanager was also  spotted later in the morning. On the Fern Garden Trail we also marveled at the beauty of an  Ebony Jewel-wing  damselfly and an Eastern Tiger Swallowtail Butterfly. On the boardwalk of the Richard Lieber Trail we saw a Phoebe, Blue-gray Gnatcatchers,  a female Downy Woodpecker, another Pileated woodpecker, a Black and White Warbler, and heard Cardinals and a Great Crested Flycatcher. From there we went on the  best  known trail of the park through the Cypress Swamp. There we saw more Black and White Warblers, two Ibis, and a Blue-headed Vireo among the tall cypress trees. Back in the campground area an Eastern Bluebird and a large flock of Yellow-rumped Warblers were spotted.
If you were not able to join us, Highlands Hammock SP would be a worth while destination to take for a birding trip this season. Soon the leaves of the hickory, gum, cypress, and maple trees will be even more colorful.
This trip was led by Shannon McGinnis who also wrote this article. Picture from Barb Taylor. More pictures of this trip will be posted on Facebook.