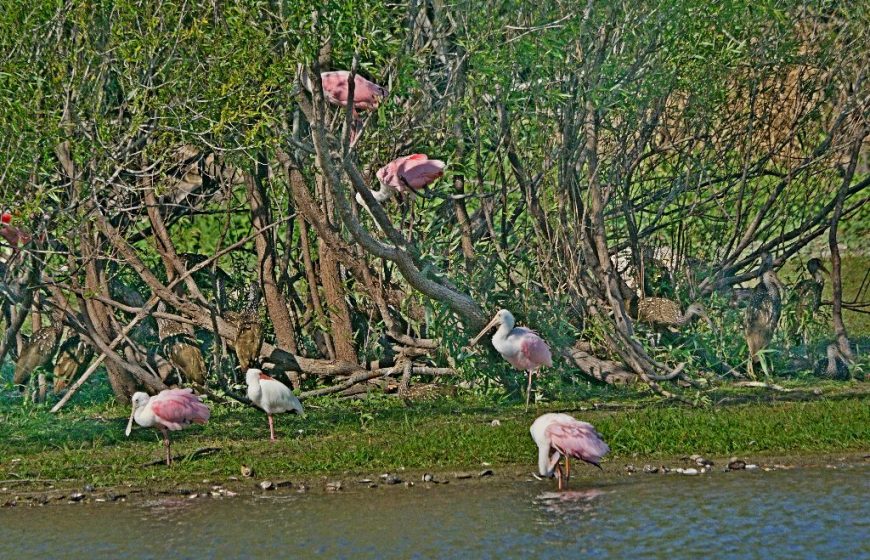 The weather was nearly perfect – sunny, not too warm, not too breezy – as 26 participants enjoyed the beauty of Myakka River State Park.  Those of us who took the back road there (Kings Highway to Route 72) spotted Crested Caracara along the way.  At the park, we were joined by Tom Rodriguez, an excellent birder who happened to be camping there.  Tom had a good telescope and we put it to good use, along with Chuck Froman’s.  We concentrated on two areas – the Bird Walk and the Concession  area, as birding in both places was quite good.  The trees in the visitor’s center area and the bridge over the Myakka River both held some birds, but we hurried to our first main stop, the Bird Walk, as there were birds there that might not stick around all day.  A large number of Sandhill Cranes roost in the area, but we were already too late to witness them leaving for the day.  We did see some along the shores of the lake.  We were not too late to see about 25 American Avocets, some close enough for good looks, but others were across the lake and seen best by scope.  Close to 50 Black-neck Stilts were in three groups, one fairly close and others across the lake.  It was wonderful to see ducks back in the park, scarce in recent years. Mottled Ducks and Blue-winged Teal are usually there, but we had a chance to see Northern Shoveler, American Widgeon and Gadwall as well.  A Northern Harrier on the ground in the wetland gave a marvelous show, and a Bald Eagle flew overhead.  A Caspian Tern was a life bird for some of the group.  The group saw the usual kinds of herons, egrets, ibises, and Wood Stork, Pied-billed Grebe, Osprey,  Forster’s Tern, both Yellowlegs, Least Sandpiper,  Savannah Sparrow as well as other birds you’d expect to find.

We moved from there to the Concession area, and walked along the beach to the weir. Astoundingly, about 75 Limpkins were present, most under and on a tree on the opposite bank.  Fortunately, not all were screaming!    Along with the Limpkins were 7 Roseate Spoonbills and an assortment of vultures, mainly Blacks.  Alligators were there, too.  We saw more Stilts as well as more wading birds, shorebirds and a few of the expected small birds of the woods.  A Belted Kingfisher and a Dunlin were among new birds seen there.  Our trip total was 51 species.

After only two stops, it was lunch time!  Our day ended pleasantly under the trees.