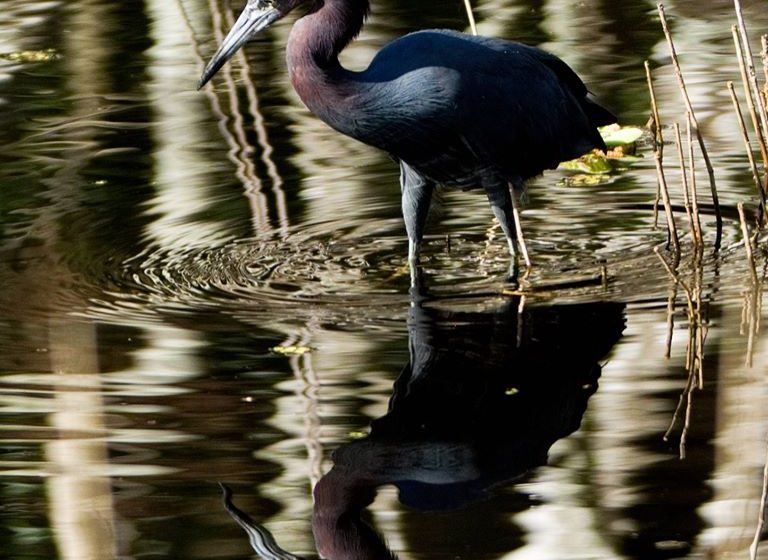 Saturday was an almost perfect day – sunny, breezy, not too warm.  A tree full of Black and Turkey Vultures greeted us as we entered the park.  Twenty participants  began the adventure at the park with a first stop at the bridge over the Myakka River, not far from park entrance.  Some earlybirds heard a Barred Owl.  Two Carolina Wrens were singing loudly. Only a couple alligators were present.  In the river or nearby vegetation we found Anhinga, Double-crested Cormorant, Great Blue Heron, Little Blue Heron, Great Egret, Tricolored Heron, Limpkin, Greater and Lesser Yellowlegs, Mottled Ducks.  Five female Hooded Mergansers came in for a landing but soon left. Two Northern Harriers were seen.  A Belted Kingfisher put on quite a display, fishing from a perch and back, his characteristic rattle making him easy to spot.  Blue-gray Gnatcatcher,  Carolina Wren, Gray Catbird, Northern Cardinal, Blue Jay, Red-bellied Woodpecker were either seen or heard.  American Crows cawed wherever we went.   Along the drive to our second stop, a deer was spotted.   At  the Birdwalk,  six White Pelicans huddled together, with a Sandhill Crane just behind them.  Roseate Spoonbills, Wood Stork,  Snowy Egret were seen.  Many shorebirds were there, although mainly at a distance.  Good views were had with Dave Lancaster’s telescope  (thank you, Dave!). included Long-billed Dowitchers, Least Sandpipers, Black-bellied Plovers and Black-necked Stilts, the latter calling loudly.   The flocks dispersed for a bit when raptors appeared.   Flocks of Glossy Ibis flew past, or landed, and a small flock of Tree Swallows was seen.  Osprey flew overhead, or tried their luck at fishing.  Three immature Bald Eagles were seen, one with a fish.  A mature eagle appeared and tried to steal the fish.  A Loggerhead Shrike was unexpectedly found near the ground, and a Red-winged Blackbird nearby.  Our third stop was past the concession area for our destination, the weir.  Here we expected to get close to the birds and give our photographers their best opportunities.  We walked along Myakka Lake to the weir.  The weir is another favorite spot for sighting alligators.  Because of the wind and cooler temperatures,  only a few were seen, but they were quite impressive.  We easily found our target bird there, a Snow Goose, far from its expected wintering grounds, feeding near the water’s edge in the company of  Black Vultures, Limpkins, Roseate Spoonbills and waders.  Turkey Vultures were around in lesser numbers.  Forty-one Limpkins were counted at the weir alone.  Six additional Spoonbills were present, small flocks of White Ibis came and went, as well as more birds seen previously.  Palm Warbler was seen in the vegetation on shore.  A Red-tailed Hawk perched overlooking it all. A walk along the river beyond the weir yielded Blue-winged Teal and more waders.  Additional sightings from members of the group include Eastern Phoebe, Kildeer, Yellow-rumped Warbler and Common Yellowthroat, bring our species total for the day to 46.  Our trip ended with a picnic in the concession area.

See some photos below: